This article is using {{Card template}}.
See Help:Style guide/Card for how to edit this kind of article.
Edit this article
Alliance Bannerman
64368 • SW_315
Regular 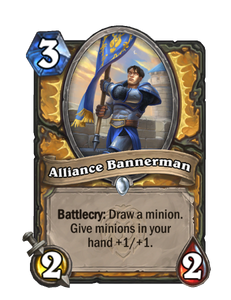 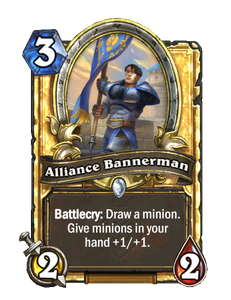 Back in my day, we had to carry our inspiration uphill both ways to war.

Alliance Bannerman is a common paladin minion card, from the United in Stormwind set.

Alliance Bannerman can be obtained by:

Alliance Bannerman provides a Handbuff effect similar to Grimestreet Outfitter but it will always buff at least one minion since its drawing one minion from your deck.

Having a large hand can increase its effectiveness from the Battlecry but also benefits from being played without any minions from your hand because it will buff the minion its drawn from.

Minions that benefit from Handbuff such as Meanstreet Marshall, Catacomb Guard, or First Blade of Wyrnn are good targets as they get powerful whenever they are buffed in hand.