This article is using {{Card template}}.
See Help:Style guide/Card for how to edit this kind of article.
Edit this article
Alexstrasza
581 • EX1_561
Regular 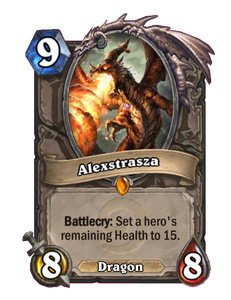 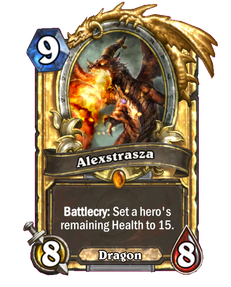 Alexstrasza the Life-Binder brings life and hope to everyone. Except Deathwing. And Malygos. And Nekros.

For other representations of Alexstrasza, see Alexstrasza (disambiguation).

Alexstrasza is a legendary neutral minion card, inducted into the Legacy set, formerly from the Classic set. 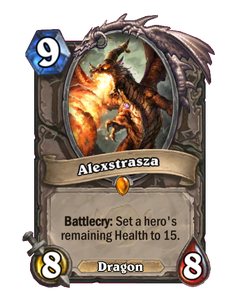 As a legendary 8/8 dragon for 9 mana, Alexstrasza is already a big body to deal with in anybody's deck, but her real power lies in her ability to set a hero's remaining Health to 15. Due to the nature of this card, it can be used in a variety of ways as a great utility minion. You can play her if you are in need of a comeback and you are below 15 Health - which can be a very effective way to make your way back into a close game - or you can use it to advance your lead and force your opponent down to half life while playing a devastating minion.

Alexstrasza is a key component in many control decks. After spending the early game stalling, the player can use the dragon's Battlecry to set the opponent's Health to 15, effortlessly compensating for minimal damage-dealing in earlier rounds, then use burst damage to quickly defeat the weakened opponent. Warriors are one of the best examples of this type of play, focusing on removal and Armor generation for the first half of the game.

Alexstrasza the Life-Binder, Leader and Aspect of the red dragonflight One of the five Dragon Aspects and Aspect of Life, is the guardian of all life in the world of Azeroth. She was one of five great dragons chosen by the titans to be empowered with a portion of the Pantheon's power and rule over her flight while they watched over Azeroth and its inhabitants. The titans also appointed her queen of all dragons. Alexstrasza loves all living creatures and protects them, and only those who menace the dragonflights or the world face her wrath.

With the rise of Deathwing during World of Warcraft: Cataclysm, Alexstrasza took a very active role in defending Azeroth against the Aspect of Death, eventually ordering her entire dragonflight to war against the Black Dragonflight. Alexstrasza, along with her fellow Aspects, gave their all to stop Deathwing once and for all, but lost much of their power in the process.

"Life is my Aspect, Dark One, and I, like all mothers, know both the pain and wonders that entails!"

Alexstrasza reappears in Descent of Dragons as Dragonqueen Alexstrasza.