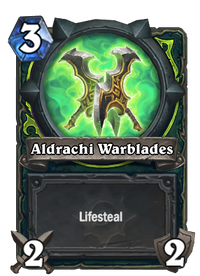 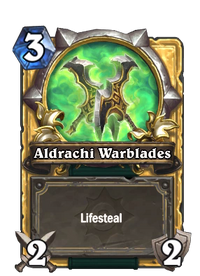 The ancient Aldrachi were the greatest warriors in the universe. Imagine their power if they'd put the handle at the END of the blade.

Aldrachi Warblades is a demon hunter weapon card, inducted into the Legacy set, formerly from the Basic set. 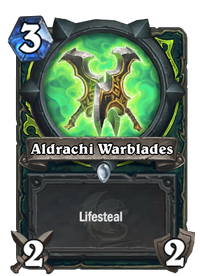 Two copies of regular and golden Aldrachi Warblades are automatically given after the player completes the Ranked's New player experience system, unlocking Wild and Classic format.

The initial 2/2 statline of the weapon is below average for a 3 mana weapon, even considering the Lifesteal. However, the strength of this card comes from the synergy with attack buffs. Demon Claws allows the demon hunter to boost this weapon's attack to 3 on demand for only 1 mana, extending its reach as well as the amount of healing it provides. It also combines with cards like Chaos Strike and Inner Demon for even more healing.

Aldrachi Warblades are an important source of health for demon hunters. Since most of their removal comes from attacking minions directly, this weapon's Lifesteal lets them freely clear minions in the early and midgame without worrying about their health, or quickly recover health in the lategame by attacking the enemy hero. Since this weapon is fairly fragile, it's important to save its charges for when you have free mana to spend on attack buffs.

Aldrachi Warblades are the Artifact weapons used by Vengeance Demon Hunters in World of Warcraft: Legion.

The aldrachi were an ancient race of proud and indomitable warriors, renowned for their might and incredible resilience. They were one of the few to ever stand against the Burning Legion; when Sargeras offered them a place in the Legion, the aldrachi refused, slaying innumerable demons before Sargeras himself killed their greatest champion, Toranaar, and ordered the Legion to bathe their homeworld in fel fire for all time. All that remains of the race are the Aldrachi Warblades, which Kil'jaeden bestowed upon the traitorous demon hunter Caria Felsoul, so that she might wield a portion of the aldrachi's might with which to devastate the races of Azeroth.