This article is using {{Card template}}.
See Help:Style guide/Card for how to edit this kind of article.
Edit this article
Aldor Truthseeker
56556 • BT_026
Regular 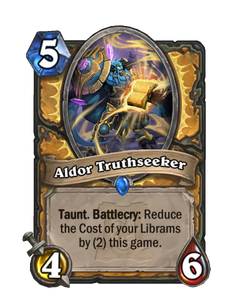 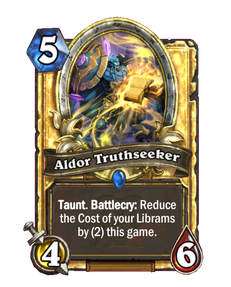 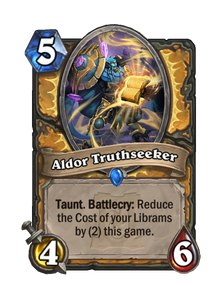 Aldor Truthseeker is a rare paladin minion card, from the Ashes of Outland set.

On its own, Aldor Truthseeker is a decent Taunt minion, being superior to Fen Creeper. However, its permanent Libram buff gives it more utility.

Aldor Truthseeker has double the effect of Aldor Attendant, and a far more useful body. This makes it more useful for decks that aren't using the entire Libram set.

An ancient order of draenei priests once run by Velen, the Aldor are currently led by High Priestess Ishanah. They are servants of the naaru in Shattrath City known as the Sha'tar. Rivals of the Scryers.