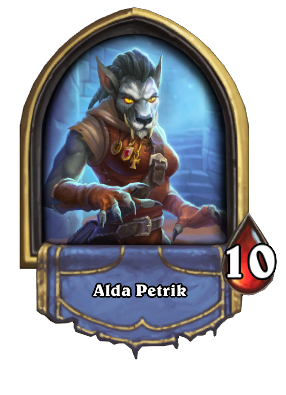 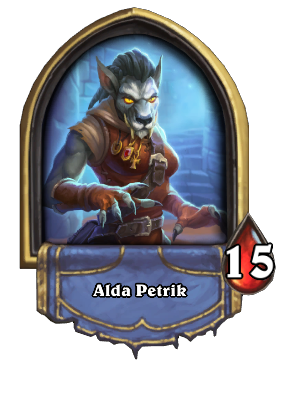 Alda Petrik is a boss that can be encountered initially in Chapter 3 of Tombs of Terror. After completing Chapter 3, this boss encounter will be available in any completed chapter.

Alda Petrik plays a beast hunter deck that has only one threat represented in Dire Frenzy spell. Since it will be a first or second encounter and Alda's beast synergy is not as dangerous as of Hunter in Ranked mode, it would not be difficult to kill the beasts and deal damage to the boss at the same time. Only Addarah or Truesilver Lance will allow to relatively safely leave the board control and focus on face-damage only.

Alda Petrik
Oh... these? They are for... research.

Alda Petrik
Researching how to make a few thousand gold that is!

Alda Petrik
Do you know the going rate for priceless artifacts?
League of E.V.I.L.... League of Explorers... tomato, tomato.
The auction house'll love these...

Oh no no, you aren't taking ME back to jail!

The common criminal, my kind of ogre.

Alda Petrik
I'll take that, and this, ooh and that...

Alda Petrik is unique to Hearthstone.