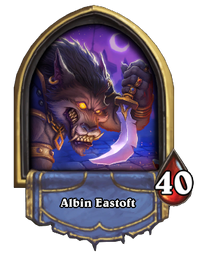 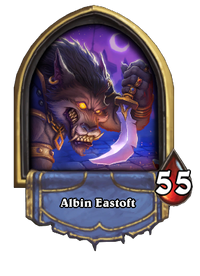 Friend? Foe? He's on a beastial rampage, he's not particular.

Albin Eastoft is a boss that can be encountered in Chapter 3 of The Dalaran Heist.

Albin will use his hero power against your minions and his. Since he carries cards like Devilsaur Egg, letting him attack yours is a better idea. If you can build a board against his hero power, you've won.

Albin Eastoft
I've the sharpest blades in Dalaran. Care for a hands-on demo?

Vessina
Your bark iss much worse than your bite.
Captain Eudora
Oh, get over yerself.

Albin Eastoft
Your tongue is sharp. Your wit is dull.

A sharp blade. A sharp mind.
Ah, my fine opponent. Shred 'em!
Sharp is the blade, that cuts thrice.
So nice-- when sliced and diced.
Where's my whetstone? I'll put it to good use.

Albin Eastoft
My poor insurance rates... They better not go up after this.
Wonder if I could pick my teeth with... OW!
<Snorting>

Albin Eastoft
What a pity. I've cut you down.

Albin Eastoft is unique to Hearthstone.