For the minion of the same name, see Al'Akir the Windlord.

Al'Akir is a hero that the player can pick in the Battlegrounds game mode. 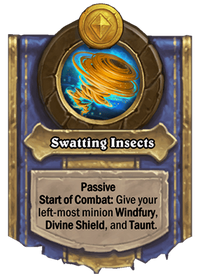 Al'Akir's hero power is strong in the early game, having a minion with divine shield for free is as good as (if not better) than having another minion on board. In the early game, maximize the utility of your hero power by choosing minions that synergize with it, for example Old Murk-Eye if you have murlocs. Having an extra minion, in return, allows more aggressive playstyle, like tiering up sooner than others if the situation allows.

The hero power is still significant in the mid to late game, as you can find minions that can make use of the Windfury from the hero power, like Foe Reaper 4000, Cave hydra, or Wildfire elemental. Alternatively, you can always just put your minion with poisonous and big stats at the front to kill two of your opponents minion.