This article is using {{Card template}}.
See Help:Style guide/Card for how to edit this kind of article.
Edit this article
Akali, the Rhino
50074 • TRL_329
Regular 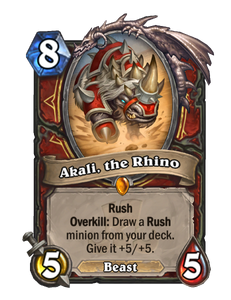 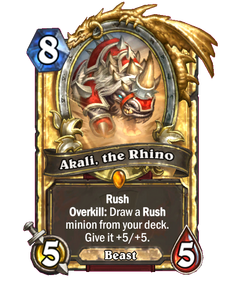 Most trolls only get to “AAAAHHH!” and don’t make it to the “kali” part. 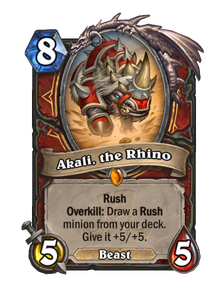 Akali, the Rhino is a legendary warrior minion card, from the Rastakhan's Rumble set.

Akali is a solid card to include in Rush-based decks. While his stats are poor, his Overkill effect compensates for it, which provides both card draw and large value later. Some minions like Darius Crowley and Zilliax benefit extremely well from the bonus stats, but even something as small as a Skaterbot or Vicious Scalehide turn into an extremely cheap but formidable form of removal, with Skaterbot additionally being able to Magnetize to another mech to grant it +6/+6 and rush for 1. Additionally, Spirit of the Rhino will let you leave your Rush minions undamaged, including Akali, which can give you a chance to activate his Overkill effect again. Since the Overkill effect is useless if you don't have any Rush minions left in your deck, you should include at least a marginal number of Rush minions to prevent this from happening.

Akali has very strong synergy with Oondasta, which lets you put both Oondasta and Akali with no loss of value on the board for the price of one.

If a copy of Akali is shuffled into your deck (which the Warrior class can do via Dead Man's Hand) and he is currently your only Rush minion, then he can draw a 10/10 copy of himself upon triggering his Overkill effect. Rogues who manage to get it can take advantage of Akali by using Gang Up or Togwaggle's Scheme to shuffle multiple copies of him into their deck and have the potential to draw a 10/10 copy of him each turn.

Akali is the Drakkari loa of rhinos. He is held in chains by his worshipers outside the gates of Gundrak.

At Har'koa's behest, adventurers free Akali who is quick to kill his subduers. However, the Prophet of Akali notices and declares "Enough", after which he drinks of the loa's blood, claiming some of his power. Infused by power of the loa, the prophet swiftly kills Akali.

In Hearthstone lore, Akali serves as the patron loa of Akali's Rhinos, the warrior team in Rastakhan's Rumble.