This article is using {{Card template}}.
See Help:Style guide/Card for how to edit this kind of article.
Edit this article
Aimed Shot
64631 • SW_321
Regular 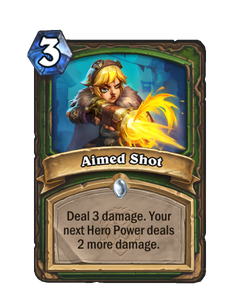 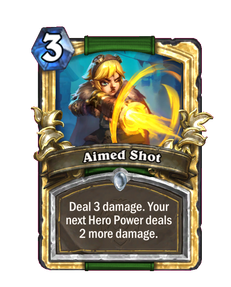 Wait, you WEREN'T aiming before?!

Aimed Shot is a common hunter spell card, from the United in Stormwind set.

Aimed Shot can be obtained by:

Aimed Shot is similar to Kill Command but its extra damage comes from its next Hero Power.

Its total damage is split into two source, the initial 3 damage and then another 4 damage coming from Hero Power. For 5 mana, it can deal a total of 7 damage or it can remove two minions that are 3~4 health.

Because of its odd cost, it can be used in Odd-decks to increase its total damage to 8.

Aimed Shot becomes much more powerful when the player finishes the second part of the Defend the Dwarven District Questline which is basically a free deal 4 damage hero power or it can be used immediately from the final reward from the questline which will refresh the hero power. This means it can deal extremely high damage output with just 3 mana.

The player does not have to use the Hero Power immediately after Aimed Shot is used, it can be saved for future turns for bigger minions or a way to close out games with its large Hero Power burst damage.