Ahune's Superior Brawl is a Tavern Brawl. It debuted on July 19, 2017. For exact times, see the schedule.

Ahune's Superior Brawl celebrate the Frost Festival event and is a followup to Ragnaros' Fire Festival. It is commentated upon by Ragnaros' rival, Ahune the Frost Lord, and is played exclusively on the Stormwind battlefield.

At the start of the match, one player is randomly selected to play as Jaina Proudmoore (mage), and the other as Uther Lightbringer (paladin), with corresponding pre-made decks. Both heroes are permanently Immune and are unable to be healed or retain any Armor for more than a single turn. At the start of the game, a Ragnaros? minion will appear on each player's side of the board. Whenever a player destroys a Ragnaros? (whether the friendly or opposing one), that player deals 4 damage to the opponent's hero; as this is the only way to deal damage to the opponent, destroying Ragnaros? is the only way to secure victory in the Brawl. When a Ragnaros? is killed, a new copy is immediately summoned to take its place, ensuring that there is always one Ragnaros? on each side of the battlefield. 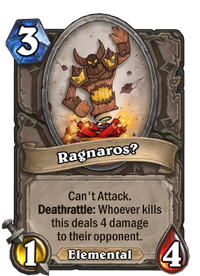 Jaina uses a Kazakus Mage-style deck with no duplicates and several board control options.

Uther's deck has a large amount of buffs and various ways of killing Ragnaros? immediately.

The first time that players enter the Tavern Brawl screen while Ahune's Superior Brawl is active, Ahune will appear and ask:

Ahune: PERHAPS YOU WOULD LIKE TO TRY MY FROST BRAWL? IT IS MUCH COOOLER THAN RAGNAROS'S BRAWL!

The Frost Lord also appears periodically in the Brawl itself to commentate on the destruction of the Ragnaros? dummies. At the start of the game, he will say:

Ahune: WHO SHALL DESTROY THE MOST FOOLS!?

He thereafter has a chance to appear and state any of the following whenever a Ragnaros? is destroyed:

If the player is defeated and loses the Brawl:

Ahune: YOU MUST DESTROY RAGNAROS HARDER!

If the player wins the Brawl: