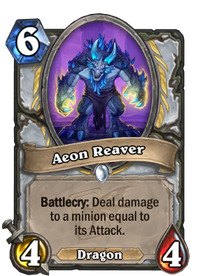 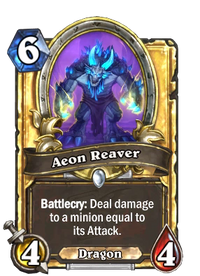 Battlecry: Deal damage to a minion equal to its Attack.

Aeon Reaver is a common priest minion card, from the Galakrond's Awakening set.

Similar to using Lightbomb on one minion, but with the addition of a 4/4 body. This is decent removal on an okay body, providing a large tempo swing.

Aeon Reaver is also a Dragon, triggering cards like Cleric of Scales, Scalerider, and Chronobreaker while it stays in your hand.