This article is using {{Card template}}.
See Help:Style guide/Card for how to edit this kind of article.
Edit this article
Activate the Obelisk
54749 • ULD_724
Regular 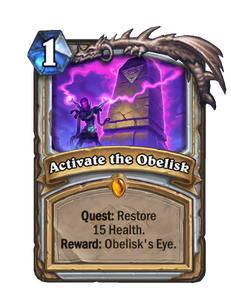 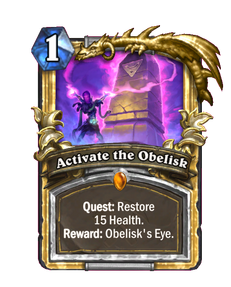 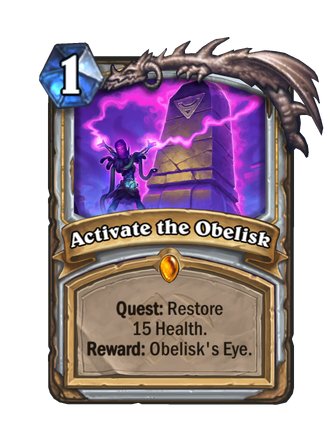 Activate the Obelisk is a legendary priest spell card, from the Saviors of Uldum set. 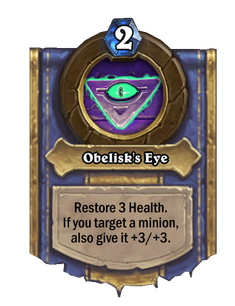 Lesser Heal, but the hard part is fulfilling the quest. It can be hard to find things to heal depending on the state of the board, so you will need to find ways to create opportunities to heal. Cheap AoE like

Injured Blademaster provides minions to heal. Reborn minions with high base health are also good, especially when combined with burst healing. Cards that provide large amounts of healing like

Circle of Healing and

Sandhoof Waterbearer will aid greatly in quest completion speed. Sometimes, you may even want to heal your enemy to get the quest completed, hence making a somewhat aggressive play style in the early game to deal significant damage. Keep in mind though that most Priest healing spells only target friendly characters, so your best hope would be to use Lesser Heal to heal the enemy a few times.

Your opponent will likely not attack you while you have the Quest active, since they won't want to give you easy progress. You can play around this by not playing the Quest on turn 1, letting them attack you before you surprise them and make free progress. Keep in mind that your opponent may suspect this and not attack you. In general, you should only hold off on the Quest until around turn 4, as otherwise you could miss out on chances to heal damaged minions. Also, beware of Mages that may play a Secret if you are sing this strategy, as you might fall for their

Obelisk's Eye is similar to Lesser Heal in function, but includes the added benefit of buffing minions by a large amount for a relatively low cost. The hero power works well with minions like

Batterhead that gain value from the extra stats. It also pairs nicely with Taunt minions to create large walls. If you don't need the extra damage or health immediately, it's better to trade with your buff target first. That turns the buff into as high as an effective +3/+6.

If you're playing against a Priest using Activate the Obelisk, you can hold off on attacking them as mentioned above. Furthermore, you can minimize quest progress by aggressively clearing their board to stop them from attacking and damaging you. You can also trade inefficiently or even cast destruction spells on your own minions, just to ensure there are no damaged targets in play to heal. How long you keep this up is generally dependent on your deck's burst potential. If you're playing a faster deck, you should wait until you have around 7 or 8 damage directly on the opponent and the fuel to keep up pressure, forcing them to spend mana on answers rather than quest progress. If you're playing a Control deck, you may never want to directly attack them, and simply wear the Priest out of resources.

If their Quest is completed, it's important to keep their board clear each turn. Obelisk's Eye will stack, causing surviving minions to quickly get out of control. Save hard removal for sticky minions like Mosh'ogg Enforcer and