This article is using {{Card template}}.
See Help:Style guide/Card for how to edit this kind of article.
Edit this article
Acidmaw
2633 • AT_063
Regular 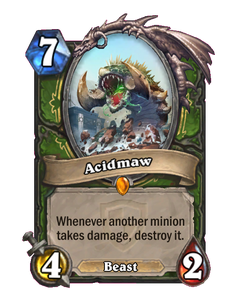 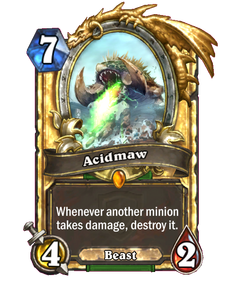 With the help of his trusty sidekick Dreadscale, the giant jormungar Acidmaw is ready to face any knight! 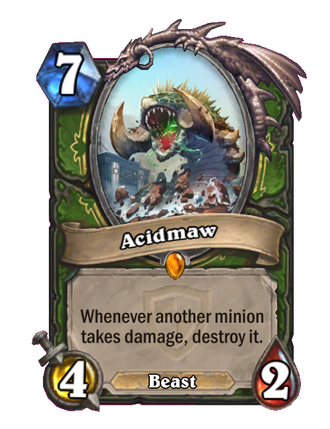 Acidmaw is a legendary hunter minion card, from the Grand Tournament set.

Dreadscale. Placing both of these cards on the field will destroy all minions other than themselves. Despite this synergy, note that this minion's triggered effect will destroy any other minion that takes damage, including Dreadscale. Furthermore, this combination only lasts 2 turns without buffs or healing as Dreadscale will also damage Acidmaw, and the release of

Build-A-Beast if you need to lock down the board.

Another obvious synergy with Acidmaw is

Unleash the Hounds. Unlike with Dreadscale, this combo will allow you to clear the enemy's board without compromising your own, except minions with Stealth.

If a mage gets Acidmaw from

Unstable Portal and plays it along with

Arcane Explosion, any enemy minion without Divine Shield will get destroyed, even the Stealthed ones.

However, this minion is still considered an extremely poor one, as its stats are beyond abysmal for the cost and the symmetrical effect can be ruinous, making your board vulnerable to being cleared by even the smallest area of effect spells like

Acidmaw is one of the two jormungars that compose the second part of the first encounter in the Trial of the Crusader - the Northrend Beasts.