Hearthstone Wiki
Register
Don't have an account?
Sign In
Advertisement
in: All cards, Wild format cards, Pages with no result queries, Oozes

This article is using {{Card template}}.
See Help:Style guide/Card for how to edit this kind of article.
Edit this article
Acidic Swamp Ooze
906 • EX1_066
Regular 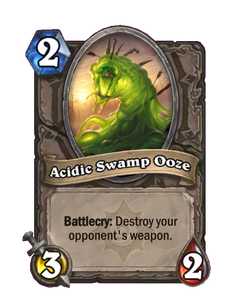 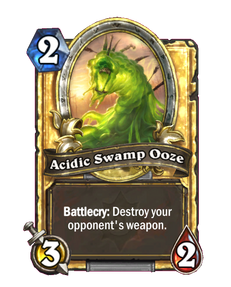 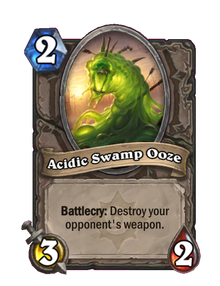 Acidic Swamp Ooze is a neutral minion card, inducted into the Legacy set, formerly from the Basic set. 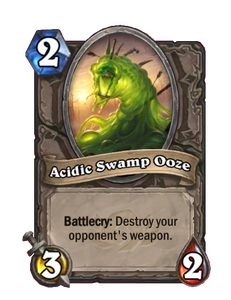 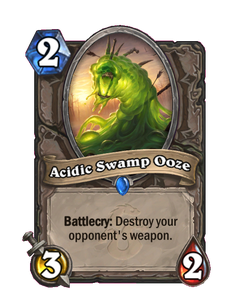 Regular and golden Acidic Swamp Ooze are uncraftable and cannot be crafted or disenchanted.

Two copies of regular Acidic Swamp Ooze are obtained for raising sum of all your class levels to 49.

Two copies of golden Acidic Swamp Ooze (Core) are obtained for winning 1000 games across all classes.

Acidic Swamp Ooze (Core) is uncraftable and cannot be crafted or disenchanted.

Acidic Swamp Ooze's attack and health alone make it a good, cheap minion. Its additional ability to act as weapon removal makes it even more effective against decks featuring weapons. Warriors, rogues, paladins are the main weapon classes, but shamans and hunters can also use weapons. Warlocks who have been replaced by Lord Jaraxxus also use the Blood Fury weapon, and Acidic Swamp Ooze can be very effective against this.

It is recommended to hold onto this card when you're facing weapon-oriented heroes, such as rogues, warriors and paladins, unless you're absolutely sure they don't use weapons in their decks, or you believe they've already used them all.

Acidic Swamp Oozes are level 39-41 mobs found in Dustwallow Marsh. The Hearthstone minion's Battlecry reflects the Oozes' tendency to ingest objects including weaponry, armor and even bags of goods.

Oozes are a type of mindless slime creatures. They are known to adapt to their environments, taking on aspects of their surroundings, which may account for the variety of oozes seen on Azeroth and beyond.

These strange creatures share an elemental heritage, but have been corrupted by the powers of chaos. Now they exist as tortured masses of semi-sentient goo.