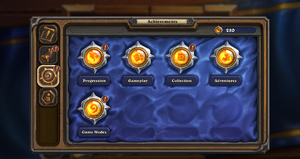 Achievements are self-contained game goals that offer challenges and satisfy goal-oriented players. They were added in the Madness at the Darkmoon Faire patch, along with the Rewards Track and revamped Quest systems.

New achievements will be added with every expansion, future game mode, and major update. Some of the new achievements can be awarded retroactively to players that have already met the criteria. These are mostly done for achievements that are tied to collecting cards or already-existing trackers, such as reaching Legend rank.

Achievement system can be viewed by clicking on Journal icon (

) at the menu screen, and then the representation icon (

) is a kind of resource that represents the player's accomplishments since they have started playing Hearthstone. Achievement points do not contribute anything to the player's economy, nor do they help the player collect cards and accumulate their collection.

Achievement points can be obtained by completing achievements. They can not be spent on anything.

Most of time, the achievements only reward achievement points and cosmetic items. To celebrate special occasions, the newest achievements may also reward XP ( 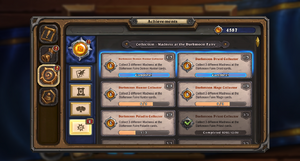 Hearthstone's achievements come in several varieties. To help keeping track of all the different achievements the player can unlock, they can find the following categories in the achievements window:

Progression achievements represent the player's Quest completion, accomplishments on Rewards Track and how they play the classes.

There is no general rule to this category.

Gameplay achievements represent the player's accomplishments of playing games. They usually consist of special conditions while playing cards, or simply how many cards they have played so far.

Collection achievements represent how much their collection has achieved. In a way, they encourage the player to collect as many cards as possible.

There is no special rule to this category.

Reward XP the player can earn, along with a lot of cosmetic items.