This article is using {{Card template}}.
See Help:Style guide/Card for how to edit this kind of article.
Edit this article
Academic Espionage
48040 • BOT_087
Regular 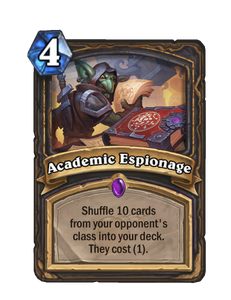 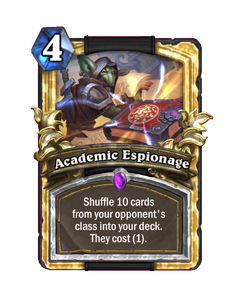 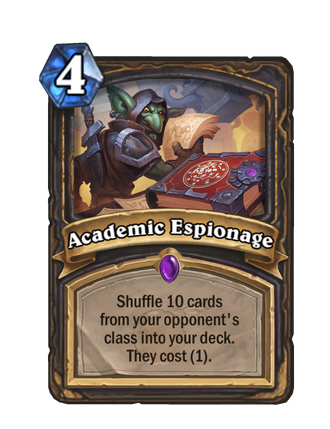 Academic Espionage is an epic rogue spell card, from The Boomsday Project set.

Academic Espionage is an extremely powerful card that can practically win a game on its own with no drawbacks (as long as you're not terribly unlucky). As you shuffle 10 total cards into your deck, the odds are that at least a few will be strong cards that now only cost 1 mana, such as

Shadowreaper Anduin. There is however always the possibility of gaining weak, low-cost cards like

When 2 are used and their effects doubled by an

Augmented Elekk or by

Valeera the Hollow, it can potentially provide an absurd 40 extra 1-cost cards. In addition to providing extra copies of the cards shuffled, Augmented Elekk also allows its users to see which cards were shuffled into the deck, this can be done by simply viewing the history bar or by using an external deck-tracking software.

Sprint can help give a large hand of cheap and potentially very powerful spells and monsters from your opponent's class. Lastly, this game-changing card can potentially be used on turn 1 with the use of

While the potential to high-roll with this card is very strong, there are a few downsides. The amount of cards it adds dilutes your deck, so if you are relying on card combos or topdecking certain cards, this decreases the chances of drawing the cards you need. On the other hand, if you are relying on this card, then drawing regular cards from your deck can be a dud, just like

When playing against priests, especially Control Priests, players should note that

Archbishop Benedictus can copy all shuffled cards and gain immense value, effectively negating the positive affect of Academic Espionage, and potentially even harm the rogue, by providing the cards to both players, while priests can utilize priest cards much better than rogues. Players can play around this by waiting until the priest has played Benedictus or be sure that the priest does not have him before playing Academic Espionage.

This card has strong synergy with

Myra's Unstable Element, guaranteeing you draw the cards shuffled in. Miracle Rogue decks also make good use out of this card since drawing a 1-cost spell will continue the chain of card draws. The large number of cards generated also allows

Tess Greymane to generate immense value if the opponent is playing a different class. Furthermore, the cards being set to 1 mana lets

Has extreme combo potential with

Tak Nozwhisker, who will add those 1-cost cards directly to your hand at the same time. This combo will require

The Coin to pull off, however.