This article is using {{Card template}}.
See Help:Style guide/Card for how to edit this kind of article.
Edit this article
Abyssal Enforcer
40541 • CFM_751
Regular 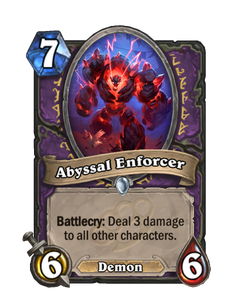 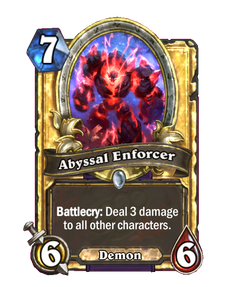 The Kabal print this on every package of illicit Mana Crystals: WARNING - DO NOT PUT WITHIN REACH OF ABYSSALS. THIS IS NOT APPROVED FOR USE BY FLAMING DEMONS OF ANY KIND. 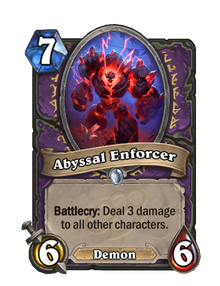 Abyssal Enforcer is a common warlock minion card, from the Mean Streets of Gadgetzan set.

A strong card, combining a decently sized minion with a Hellfire-like effect. Be careful of the self-damage, both to you and your own minions.

The Abyssal Enforcer is best suited for control-oriented Warlock decks, who can use its effect to clear the board and help stabilise.

Abyssal Enforcer is an Abyssal in the service of the Kabal. It has been transformed by their illegal Red Mana Crystals, resulting in red crytalline growths emerging from its body.