This article is using {{Card template}}.
See Help:Style guide/Card for how to edit this kind of article.
Edit this article
Abomination
440 • EX1_097
Regular 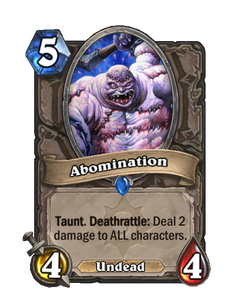 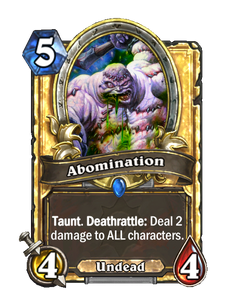 Abominations enjoy Fresh Meat and long walks on the beach. 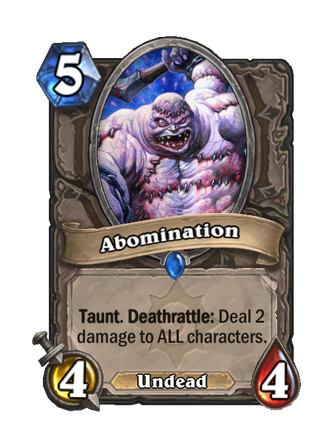 Abomination is a rare neutral minion card, inducted into the Legacy set, formerly from the Classic set. 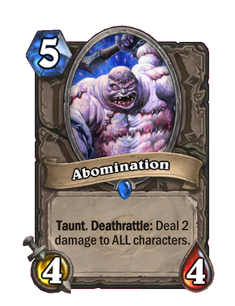 The Abomination is a minion that can be used both offensively and defensively. Just having it on the field will stop many strategies, particularly low-health minion aggro strategies, right in their tracks due to the deadliness of its Deathrattle ability.

As a 4/4 minion with Taunt, it can trade for at least a few weaker minions or damage a beefier one - and hopefully finish it off with its Deathrattle. The Deathrattle is similar to

Explosive Sheep, but damages heroes as well as minions.

This card's main vulnerability is to Silences and Transformation effects. Return effects can also be used to remove it temporarily.

Abominations are a type of undead creature first seen as a unit in Warcraft III and then again in World of Warcraft. This card's art depicts an Unstoppable Abomination from the Kel'Thuzad raid encounter.

Abominations are twisted, mutilated undead creatures comprised of multiple dead limbs and body parts from many different corpses. They are enormous warriors, scarred by loose stitchings and putrid, open sores. They love to carve flesh and tear their enemies apart. The slow-moving and dull-witted abominations constantly drip blood and smell like disease-ridden slaughterhouses. They carry large cleavers into combat and wield various sickle-bladed hooks on their disproportionate limbs