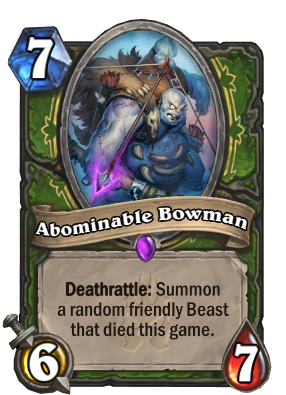 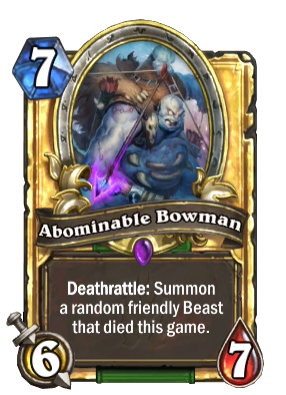 Frosty the Bowman... was an angry hateful soul... with a fresh hewn bow and a missing nose...

Abominable Bowman is an epic hunter minion card, from the Knights of the Frozen Throne set.

Abominable Bowman can be obtained through Knights of the Frozen Throne card packs, or through crafting.

This card has decent stats on it's own, so it can be played as a late-game card. However, it has potential to resurrect a powerful beast like Savannah Highmane or Swamp King Dred. But it has a drawback that the deathrattle is absolutely random, and many hunter beasts generate tokens like Alleycat, making this card unreliable.

Abominations are twisted, mutilated undead creatures comprised of multiple dead limbs and body parts from many different corpses. They are enormous warriors, scarred by loose stitchings and putrid, open sores. They love to carve flesh and tear their enemies apart. The slow-moving and dull-witted abominations constantly drip blood and smell like disease-ridden slaughterhouses. They carry large cleavers into combat and wield various sickle-bladed hooks on their disproportionate limbs.

The abominations were created by Kel'Thuzad.