This article is using {{Card template}}.
See Help:Style guide/Card for how to edit this kind of article.
Edit this article
A Beautiful Oasis
56207 • ULDA_BOSS_62h
Regular 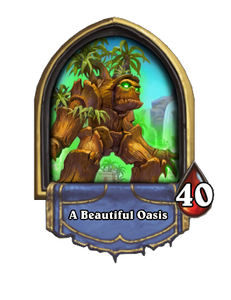 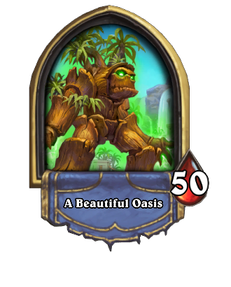 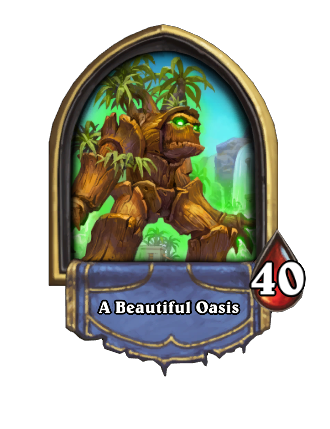 A Beautiful Oasis is a boss that can be encountered initially in Chapter 2 of Tombs of Terror. After completing Chapter 2, this boss encounter will be available in any completed chapter.

This battle is one of the few ones that is easier on Heroic mode than in Normal. If the player's deck is not filled with high-cost cards,

Chaos Gazer does), so it is possible to always easily play another card and ignore the corrupt ones.

In Normal mode Oasis' deck has a significant resemblance with Quest Druid and contains several cards of other classes for support and protection. Since it has two copies of

Band of Scarabs may play pretty well. In this case BEEEES!!! will mean the loss of 3 mana, and in the best case - activation of

Eternal Tomb. If Swarm of Locusts summons 7 minions, a Beautiful Oasis won't be able to play any other cards except

Overflow, which doesn't cancel an easy victory (the exception is

Map of Uldum will also perform well, allowing to minimize losses from

Mirage if the player's deck is heavy. Generally, it's advisable to keep the pressure and don't be afraid to completely swarm a board, keeping in mind the boss does not have AoE. This will allow not only to win quickly but also will prepare to

Colossus of the Moon.

The Heroic deck of Beatutiful Oasis is a weak likeness of Mill Druid from 2014-2015 years. This deck does not allow the boss to win since he will constantly supply the player with resources. Cards received from the boss can be used both as a supplement to the boss damage and as a target for

Mirage, protecting more important cards. Due to its AI and the lack of cards for 1-2 mana without a negative effect, Oasis will very rarely conduct unpleasant combinations like

Since the heroic deck does not contain a lot of powerful cards and also lacks of AoE, playing all possible resources would not be a bad tactics.

Reno Jackson
Something about this stinks. It stinks like something that doesn't exist.
Sir Finley
My gills are tingling. Something is not quite right...
Elise Starseeker
Something is not right here...
Brann Bronzebeard
Fresh water, peaceful scenery... this is a trap if ever I've seen one.

A Beautiful Oasis is original to Hearthstone. Perhaps the plague of madness destroyed the oasis and created a mirage. Or under plague's influence, the oasis tries to kill travelers and offers them a poisoned water.